The Impact of COVID-19 on Oil Prices

While we don’t know how severely COVID-19 will affect public health and the global economy, the disease is a driver of global uncertainty and concern.

Uncertainty, of course, is bad for the economy, bad for consumer sentiment, and bad for business investment. While this kind of pandemic usually produces only a very short term economic impact, it can have some serious effects in particular areas of the economy.

One of those areas is the oil business. The COVID-19 outbreak is occurring at a time when the oil market is already weak and prices are under pressure. Because of the disease’s potential for further business disruption, the oil industry is concerned. When it looks at China and sees a lot less construction, less tourism, fewer people going out to movies and restaurants, and so many factories shutting down, it sees trouble.

If the outbreak is contained soon, we should be optimistic about how oil prices are going to respond. For now, the industry will likely see additional downward pressure as news continues to come out and more infections occur, but that would probably lead to production cuts by OPEC and firming prices.

In the past, short-term crises were met with workaround solutions. The closing of the Suez Canal in 1956, for example, didn’t have much of an impact on oil prices because tanker traffic went around the Horn of Africa. Transit took longer, but the oil was delivered. In the case of this coronavirus, any problems in Wuhan, which is a transport hub through which many goods pass, likely will trigger a similar temporary solution.

If the disease is not contained in the short run, and if it spreads significantly to Europe and the US – or to South America, Africa, and Southeast Asia – global economic activity will suffer. Demand for oil, and prices, will decline.

Travel and tourism are likely to be the industries most affected by a longer outbreak. For the oil business, that means a drop in jet fuel prices much greater than any decline in the price of gasoline. China uses roughly a million barrels of jet fuel a day, accounting for about 12% of global jet fuel demand. Much of that fuel is used for international travel, which has been affected already, but a lot is used for domestic flying, and it’s not clear how much of that is shutting down.

History provides some parallels that may be helpful. In response to the SARS outbreak in 2003, for example, quarterly growth in oil demand dropped by about half. But it rebounded the next quarter. While the Chinese stock market didn’t recover for about five months and tourism and air travel were heavily affected, people didn’t stop traveling to Europe. 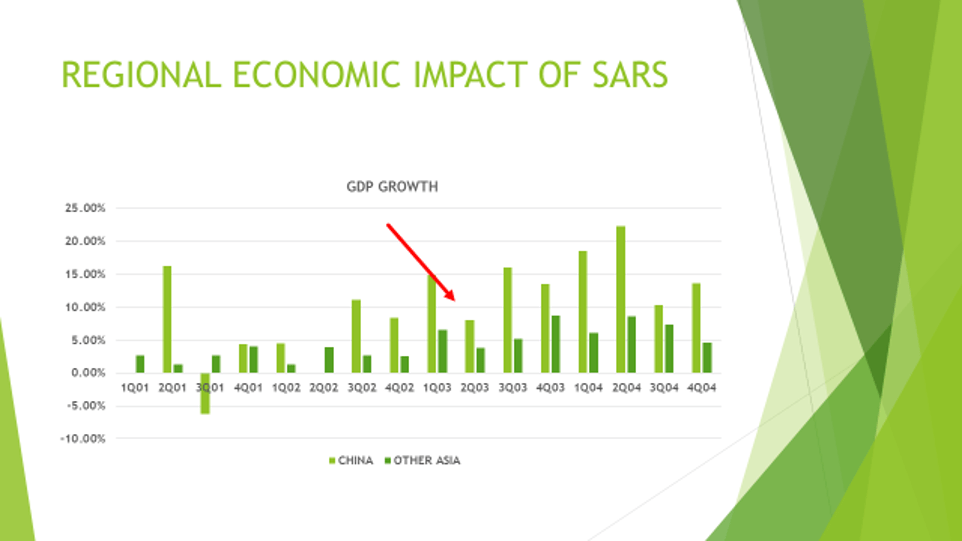 The Chinese refining industry could suffer doubly because they might wind up with a glut of jet fuel as well as middle distillate. If they export the surplus, Singapore and the Middle East will feel the effects.

The troubling thing about COVID-19, as compared with SARS, is that 17 years later, everything is on a much bigger scale – and more connected. Where China exported $600 million in goods and services in 2003, it exported $2.4 trillion in 2017. And instead of $400 billion in imports, China imported $1.5 trillion. If Chinese production is significantly reduced and their trade declines sharply, say by 15% or 20%, that’s fairly significant on a global level. That may be only a short-term knock, but it could be a trigger that unleashes a recession.

Recession is not an imminent threat and certainly not an imminent danger; it’s not even a high-probability event. It is something to be aware of. What we’re likely to see is OPEC trying to calm the markets. Failing that, it is likely to cut production just enough to reassure markets and reassure traders. The Saudis probably will lead the way, and if they can encourage Kuwait, the Emirates, and maybe Iraq to chime in with reassuring noises, the reality and promise of production cuts could be enough to tide things over.

Michael Lynch is President of Strategic Energy & Economic Research and is a Distinguished Fellow with the Energy Policy Research Foundation. Mr. Lynch was also a Chief Energy Economist for DRI-WEFA (now IHS Markit). Previously, he held a number of research positions at M.I.T. His book, “The Peak Oil Scare and the Coming Oil Flood,” was published in July 2016.

This article is adapted from the GLG webcast, COVID-19: Oil Prices Impacts. If you want access to this webcast or would like to speak with Michael Lynch, or any of our more than 700,000 experts, contact us.

GLG is supporting nonprofits on the frontline of COVID-19 relief, pro bono. If you represent or know of an organization that could use our help, let us know here. If you are a GLG council member whose expertise might be valuable to a relief organization, please get in touch here.